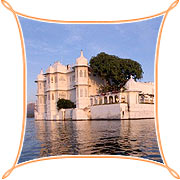 In the harsh terrain of the hills and ravines of Aravallis, flourishes the city of lakes, Udaipur. One of the most romantic places in India, Udaipur is situated around the shimmering clear blue water lakes, which whisper the mood of a bygone era.

The city was founded in 1567 AD by Maharana Udai Singh on the advice of a sage. Udaipur was last of the numerous Mewar capitals. It was in Udaipur that legendary Maharana Pratap was born. He was obsessed with Chittaur and the past glories of the Sisodia clan possessed his mind. Maharana Pratap left Udaipur to win back Chittaur from the Mughals. But he failed in his attempts and Udaipur remained the capital of Mewar till India got her independence.The memory of the failure of noble Pratap gives Udaipur its pervading mood of nostalgic wistfulness.

The city acquires its scenic beauty from the Aravallis. Three lakes- Pichola, Fateh Sagar and Udai Sagar make it an oasis in the desert. 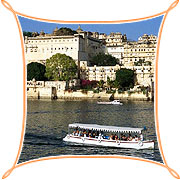 Sahelion-Ki-Bari : On the shores of Fateh Sagar Lake was built a garden for the 48 young girls waiting to be sent to the royal house as part of dowry. This garden is laid with extensive lawns, fountains and shady walking lanes. There are four pools with dainty kiosks and fountains with elephant trunks for spouts. These gardens appear discrete and impeccable in taste

Jaisamand Lake : 48 kms from the city, this artificial lake was built in 17th century by Maharana Jai Singh. The marble 'Chhatris' along the embankment add grace to this second largest lake in Asia. On either sides of the lake were built the palaces for the favourite queens of the King. People of the Bhil tribe still inhabit the islands in Jaisamand lake.

City Palace : City Palace, the majestic white royal building towers itself on a hill and is surrounded by crenellated walls. The palace was completed in its present form by the contribution of many rulers. Originally started by Udai Singh, the later additions were so carefully planned and integrated with the original building that it becomes difficult to believe that the building was not conceived as a whole. The city palace stands along the shores of Lake Pichola.

Lake Palace : The Lake Palace hotel amazes and delights you at every turn. Every inch of it is made of pure white marble, slender carved columns, fountains, filigreed screens and swimming pool, created for the private frolics of a princess. It is the early morning musical cacophony of birds and white masses of bougainvillea drooping over a rippling lily-pond that attracts the tourist.

The Lake Palace Hotel is considered to be among the best hotels around the world. The Rajasthan Tourism Development Corporation provides various categories of rooms and dormitory at the Kajri Hotel. Apart from the hotels, there are Tourist guest houses and municipal guest houses. There are dharamshalas and the railway offers its retiring rooms at nominal rates. Paying guest accommodations are also available.

Shopping can be a pleasure at the Hathipole, Chetak Circle, Clock Tower, Palace Road and Bapu Bazaar. Rajasthan Government also has its own Handicraft emporium. The shops of Udaipur have plenty of exquisite items to offer. The dainty folk toys, brightly coloured garments, hand printed textiles, batiks, and tie & dye sarees and fabrics to name few. 'Pichwais' or wall hangings painted on cloth are world renowned for their vivid colours and themes. The craftsmanship is at its peak in the metal images and chunky silver jewellery.

Air : The City of Lakes is well connected by air services. The Dabok Airport is 21 kms from the city centre.

Rail : Railway has trains from all over the country to destination Udaipur. The Palace On Wheels covers this magnificent city during its eight day package tour.

Road : There are bus services from tourist places in Rajasthan , Gujarat and Delhi.