Since the 17th century, travellers have crossed continents to come and see this ultimate memorial to love, and few have been unmoved by its incomparable beauty. Taj Mahal stands in the city of Agra, in the northern Indian state of Uttar Pradesh, on the banks of the Yamuna river. It was built in the memory of the beautiful Arjumand Bano Begum, who won the heart of a Mughal prince. She was married at 21 to Emperor Jahangir's third son Prince Khurram and stayed loyally by his side through good times and bad: in the luxurious royal palaces of Agra as well as the transient tents of war camps. In AD 1628, Khurram became king after a bloody battle of succession; he took the name Shahjahan or King of the World and showered his beloved begum with the highest titles. 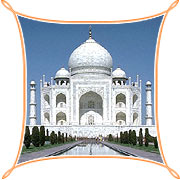 She became Mumtaz Mahal, the Exalted of the Palace and Mumtaz-ul-Zamani, the Exalted of the Age. But Mumtaz Mahal was not destined to be queen for long. In 1631, Shahjahan went on an expedition to the South and, as always, Mumtaz Mahal accompanied him. But she died in childbirth at Burhanpur. She had borne Shahjahan fourteen children, of whom four sons and three daughters survived. When Mumtaz Mahal died, she was just 39 years old. Shahjahan was inconsolable and contemporary chronicles tell of the royal court mourning for two years.

There was no music, no feasting, and no celebration of any kind. Shahjahan, who was a passionate builder, now decided to erect a memorial marble that the world would never forget. The site selected for the tomb was a garden by the Yamuna river, unshadowed by any other structure. The garden had been laid by Raja Man Singh of Amber and now belonged to his grandson, Raja Jai Singh. By a royal firman, Shahjahan gave Jai Singh four havelis in exchange for the garden. The site was also chosen because it was located on a bend in the river, and so could be seen from Shahjahan's personal palace in Agra Fort, further upstream.

Arjumand Bano Begumpo, pularly known as Mumtaz Mahal, who died in AH 1040 (AD 1630) had a last wish to her husband was "to build a tomb in her memory such as the world had never seen before". Thus emperor Shah Jahan set about building this fairytale like marvel. The construction of Taj Mahal was started in AD 1631 and completed at the end of 1648 AD.

For seventeen years, twenty thousand workmen are said to be employed on it daily, for their accommodation a small town, named after the deceased empress-'Mumtazabad, now known as Taj Ganj, was built adjacent to it. Amanat Khan Shirazi was the calligrapher of Taj Mahal, his name occurs at the end of an inscription on one of the gates of the Taj. Poet Ghyasuddin had designed the verses on the tombstone, while Ismail Khan Afridi of Turkey was the dome maker. Muhammad Hanif was the superintendent of Masons. The designer of Taj Mahal was Ustad Ahmad Lahauri. The material was brought in from all over India and central Asia and it took a fleet of 1000 elephants to transport it to the site. The central dome is 187 feet high at the centre.

Red sandstone was brought from Fatehpur Sikri, Jasper from Punjab, Jade and Crystal from China, Turquoise from Tibet, Lapis Lazuli and Sapphire from Sri Lanka, Coal and Cornelian from Arabia and diamonds from Panna. In all 28 kind of rare, semi precious and precious stones were used for inlay work in the Taj Mahal. The chief building material, the white marble was brought from the quarries of Makrana, in distt. Nagaur, Rajasthan. 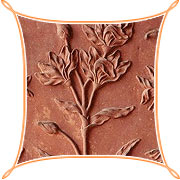 In height, the tomb stands on its own marble plinth, which rests on a red sandstone platform that serves to level the land as it slopes to the river. Four tall minarets rise up from the corners of the white marble plinth. They taper to a majestic height of 138 ft. and are crowned with eight windowed cupolas. elegantly accent the central structure, framing the space like the mounting of a jewel. The marble mausoleum is square in plan with chamfered corners. Each facade of the tomb is composed of a grand iwan framed by bands of calligraphy. The doorways inside these iwans are also adorned with calligraphy.

The iwan is flanked on both sides by small double arches one over the other. They are rectangular while the arched alcoves of equal size at the angles of the tomb are semi-octagonal. Each section in the facade is well demarked on both sides by attached pilasters which rising from the plinth level of the tomb rise above the frieze and are crowned by beautiful pinnacles with lotus buds and finials. The pinnacles ornament the superstructure and help along with the other features to break the skyline gracefully. The Taj Mahal is entered through the portal on the south side. Inside, two stories of eight rooms (four rectangular rooms on the sides and four octagonal small rooms at the corners) surround a central chamber.

These rooms were originally used for the mullahs to chant the Koran and for Musicians who played soft Indians and Persian melodies. In this nine part plan, the visitor can circumambulate through the subsidiary rooms on each floor since they are interconnected. The central chamber is octagonal, and in the centre is the tomb of the queen and to one side is the casket of the emperor. The hall is 80 ft. high from the pavement to the soffit of the interior dome. This makes sound echo.

In this courtyard stand the main gateway to the Taj and its gardens, a massive portal that opens to the south. Detached gateways were long a traditional feature of Muslim architecture and could be found fronting tombs and mosques throughout the East. Symbolically to the Muslim, such an entrance way was the gate to paradise. Metaphysically, it represented the transition point between the outer world of the senses and the inner world of the spirit. The gateway is richly embellished.

Of particular note are the floral arabesques fashioned from gemstones and inlaid in while marble which decorate the spandrels of the arches. Also impressive are the inlaid black marble inscriptions that frame the central vaulted portal or iwan. These passages are excerpts from the Koran, which is considered by Muslims to be the word of God as revealed to Mohammed. It is here that Shah Jehan's calligraphers have performed an amazing optical trick : the size of the lettering that runs up and over the arch appears to be consistent from top to bottom. This illusion was created by gradually heightening the size of the letters as their distance from the eye increased; from the ground the dimensions seem the same at every point. This ingenious trompe l'oeil effect is used with equal success on the main doorway of the Taj itself. It is said that upon first beholding the Taj through this gateway it will look small and far away, as if built in three-quarter scale.
Inquire Now for Best Deals