Overlooking the River Yamuna, and visible from the fort in the west, the Taj Mahal stands at the northern end of vast gardens enclosed by walls. Though its layout follows a distinctly Islamic theme, representing Paradise, it is above all a monument to romantic love. Shah Jahan built the Taj to enshrine the body of his favourite wife, Arjumand Banu Begum, better known as Mumtaz Mahal ("Elect of the Palace"), who died shortly after giving birth to her fourteenth child, in 1631. 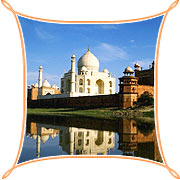 The Taj Mahal (Crown Palace) is India's most famous structure, and, perhaps the most beautiful piece of architecture in the world. Photographs cannot truly capture the grandeur of this perfectly proportioned tomb of Mumtaz Mahal and its creator, Shah Jahan, the fifth Mughal ruler. Mumtaz Mahal was the second, and favorite, wife of Shah Jahan (r. 1628-1658). A Persian princess born as Arjuman Banu Begum, she was a significant influence in his life and in his policies. She died at age thirty-nine while giving birth to their fourteenth (some say thirteenth) child in 1631. The ruler went into deep mourning and much of his empire was compelled to do the same. The Taj Mahal is set on a raised platform that is 6.6 meters (20 ft) high and covers an area of 93.9 sq. meters (313 sq ft). The corner minarets are 41.1 meters (137 ft) high. The main structure is 62 meters (186 ft) on each side. In contast to the gleaming white marble of the mausoleum, there is a pair of red sandstone buildings flanking the tomb to the west and to the east; the western building is a mosque, while the other, sometimes called the guest house or museum, was built to complete the symmetry of the scene. The water causeway and fountains beautifully join the gateway and the tomb in perfect symmetry.


Garden Water Devices
A green carpet of garden runs from the main gateway to the foot of the Taj. In essence, it is a Persian garden, a from born and nursed to maturity in the desert flat of Persia. Such gardens were introduced to India by Baber, the first mughal emperor, who also brought with him the Persian infatuation with flowers and fruit, birds and leaves, symmetry and delicacy. Unlike other Oriental gardens - especially those of the Japanese, who learned to accentuate existing resources rather than formalise them - the Persian garden was artificially contrived, unbashedly man-made, based on geometric arrangements of nature without any attempt at a "natural" look.

The architect who was fully aware of the unaesthetic appearance of the grotesque pur-ramps and crude conduits, designed a clever system to procure water for the Taj through underground pipes. Water was drawn from the river by a series of purs (manual system of drawing water from a water body using a rope and bucket pulled by bullocks) and was brought through a broad water channel into an oblong storage tank of great dimensions. It was again raised by a series of thirteen purs worked by bullocks. Except for the ramps, the other features of the whole water system have survived. An over-head water-channel supported on massive arches carried water into another storage tank of still greater dimensions. Water was finally raised by means of fourteen purs and passed into a channel which filled three supply tanks, the last of which had pipe mouths in its eastern wall. The pipes descended below and after travelling underground crossed into the Taj enclosure. One pipe line runs directly towards the mosque to supply the fountains in the tanks on the red sandstone plinth below the marble structure. Copper pipes were used for separate series of fountains in the north-south canal, lotus pond and the canal around it.

Structure of Taj Mahal
Essentially square in shape, with peaked arches cut into its sides, the Taj Mahal surmounts a square marble platform marked at each corner by a high minaret. Topped with a huge central dome, it rises for over 55m, its height accentuated by a crowning brass spire, itself almost 17m high. On approach, the tomb looms ever larger and grander, but not until you are close do you appreciate both its awesome magnitude and the extraordinarily fine detail of relief carving, highlighted by floral patterns of precious stones. Carved vases of flowers including roses, tulips and narcissi, rise subtly out of the marble base, a pa ttern repeated more colourfully and inlaid with precious stones around the four great arched recesses (pishtaqs) on each side.


The Tomb
The south face of the tomb is the main entrance to the interior: a high, echoing octagonal chamber flushed with pallid light reflected by yellowing marble surfaces. A marble screen, cut so finely that it seems almost translucent, and decorated with precious stones, scatters dappled light over the cenotaph of Mumtaz Mahal in the centre of the tomb, and that of Shah Jahan next to it. Inlaid stones on the marble tombs are the finest in Agra; attendants gladly illuminate the decorations with torches. The 99 names of Allah adorn the top of Mumtaz's tomb, and set into Shah Jahan's is a pen box, the hallmark of a male ruler. These cenotaphs, in accordance with Moghul tradition, are only representations of the real coffins, which lie in the same positions in an unadorned and humid crypt below that's heavy with the scent of heady incense and rose petals.
.. Click To Book Taj Mahal Tour