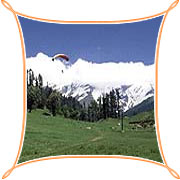 Shimla has been blessed with all the natural bounties, one can think of. Dwelling on a panoramic location, the hilly town is surrounded by green pastures and snow-capped peaks. The spectacular cool hills accompanied by the structures made during the colonial era create an aura, which is very different from other hill stations.

Bulging at its seams with unprecedented expansion, Shimla retains its colonial heritage, with grand old buildings, among them are the stately Viceregal Lodge, charming iron lamp posts and Anglo-Saxon names. The Mall, packed with shops and eateries, is the centre of attraction of the town, and Scandal Point, associated with the former Maharaja of Patiala's escapades, offers a view of distant snowclad peaks. 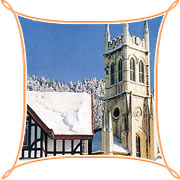 Christ Church & St. Michael's Cathedral : Built in 1846-1857, Christ Church is the second oldest church of Northern India. The Church overlooks the ridge and is one of the landmarks of Shimla. The clocks on Christ Church were added later but none of them are functional now. The Church's exquisite beauty comes with the stained glasses that are fitted on its windows. The town's other important churches are St. Michael's Cathedral and Roman Catholic Cathedral, which is just off the Mall.

The Mall : This is the main shopping centre of Shimla with restaurants. The Gaiety Theatre, which is a reproduction of an old British theatre is a center of cultural activities. A passenger lift of HPTDC can be taken from the Cart Road and the Mall. Lakkar Bazaar adjacent to the Ridge is popular for its wood-crafts and souvenirs.

The Ridge : The large open space in the heart of town presents excellent view of the mountain ranges. Shimla's landmarks - the Neo-Gothic structure of Christ Church and the new - Tudor Library building is worth seeing.

Jakhu Temple : Dedicated to Lord Hanuman, this temple is at an altitude of 2,455m near the highest point of Shimla ridge. It offers a fine view over the surrounding valleys, out to the snowcapped peaks, and over the town itself. The temple is a 45-minute walk from the Mall. Jakhu is a vantage point for witnessing the changing skyline as the sun rises or sets.

The capital city and commercial hub of Himachal has got some of the finest options of accommodation. The options vary from luxurious, posh looking five star hotels, cottages and holiday resorts to economy class and budget hotels and lodging rooms.

The famous Himachali hat comes in different rates and vivid colors. Lakkar Bazaar is famous for items made from wood. These decorative wooden items are made from the softwood found in the hilly region. Further, dry fruits and natural herbs, which have many medicinal properties, are also easily available in the shops.

Air : The Jubbarhatti airport is 23-km from Shimla and major domestic airlines cater their services from here to Shimla. One can catch direct flights from Delhi.

Rail : Shimla has a narrow gauge railway line on which Toy Train runs from Kalka to Shimla. The train cruises its way through valleys and beautiful landscapes at a very slow pace making the journey very pleasant. From Kalka one can take trains to other parts of India too. The Toy train from Shimla is of two types - one is the normal multi coach train and the other is the single car train, which has a glass roof giving an enthralling experience during the journey.

Road : Roads connect Shimla with other places in Himachal as well as other major towns and cities of the neighbouring states. There is regular bus service from Delhi and Chandigarh as well as ordinary; semi deluxe, deluxe and AC coaches for Shimla are available too.