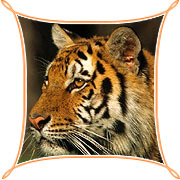 A small village near the township of Sawai Madhopur, in the state of Rajasthan, Ranthambhore gets its name from the two hills, Ran and Thambor, which are in close proximity. The Ranthambore Park is set between the Aravalli and Vindhya ranges. Its deciduous forests were once a part of the magnificent jungles of Central India. The terrain is rugged and there are rocky ridges, hills and open valleys with lakes and pools.

Ranthambhore is a heritage site because of the picturesque ruins that dot the park. There are lake palaces, 'chhatris', old fortifications and a majestic 1,000-year-old fort overlooking the park. The lovely Jogi Mahal is located at the foot of the fort and gives magnificent view of the Padam Talao, painted white with water lilies.

It has a chequered history and was the stronghold of the Yadavas in the 8th century. It came under Chauhans, and was ruled by them 10th century onwards. The Mughal emperors Akbar and Aurangzeb also occupied the magnificent fort. The park is famous for tigers and due to conservation efforts, the tiger population has stabilized if not increased here. The tigers can be spotted quite often even during the day, at their normal pursuits-- hunting and taking care of their young ones.

Ranthambhor is one of the best places to see these majestic predators. Old crumbling walls, ruined pavilions, wells, and other ancient structures stand witness to the region's glorious past. The entire forest is peppered with the battlements and spillovers of the Ranthambhore fort - tigers are said to frequent these ruins, too.

The Jogi Mahal : The entry point to the park, goes straight to the foot of the fort and the forest rest house, Jogi Mahal. The latter boasts of the second-largest Banyan tree in India.

The Badal Mahal : The “palace of the clouds”, situated in the fort has a very interesting location and seems as if hanging out in space. The famous 84-column 'chhatri' of King Hammir stands out magnificently where he used to hold an audience. The Padam Talab, the Raj Bagh Talab and the Milak Talab are some of the lakes in the area worth seeing. 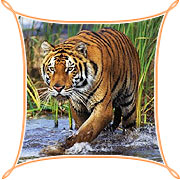 Ranthambore National Park : Ranthambhor National Park is an outstanding example of Project Tiger's efforts at conservation in the country. The forests around the Ranthambhore Fort were once, the private hunting grounds of the Maharajas of Jaipur. The desire to preserve the game in these forests for sport was responsible for their conservation, and subsequent rescue by Project Tiger. In 1972, it was estimated that there were around 1927 tigers in India, of which Rajasthan had 74, and the number of big cats in Ranthambhore Sanctuary was 14. 1972 was also the year that Project Tiger was launched, and this sanctuary was taken into its wings, alongwith seven other sanctuaries and national parks.

As a result of stringent efforts in conservation, tigers, the prime assets of the park, have become more and more active during the day. More than in any other park or sanctuary in India, tigers are easily spotted here in daylight. They can be seen lolling around lazily in the sun, or feverishly hunting down Sambhar around the lakes. Therefore, Ranthambhore is probably the ideal park for wildlife photography, and it does attract professional wildlife photographers, from all over the globe.

The place is famous for “khus” perfumes and other objects made of “khus” including fans, small boxes and caps etc.

Rail : The Park is around 11-km away from Sawai Madhopur railway station, that lies on the Delhi to Bombay trunk route.

Road : A good network of buses connects Sawai Madhopur, the nearest town, with quite a few areas around.