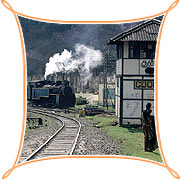 Udhagamandalam (Ooty), the capital of Nilgiri district, is popularly known as the "Queen of hill stations' among the tourist circuits. It is situated at a distance of 105 km away from Coimbatore. The height of the hills in the Nilgiri range varies between 2280 and 2290 metres, the highest peak being Doddabetta at a height of 2623 metres.

It is believed that the name Nila, has been in use for over 800 years since, the King of the Hoysalas Vishnu Vardhana, who ruled from 1104 to 1141 AD seized the Nilgiris Plateau. His general Ponisia recorded this fact in 1117 AD with mention of Todas. The name Nilgiri was due to the blue haze, which envelops the range with most distant hills of considerable size.

This Nilgiri territory came into possession of the East India Company as part of the ceded lands, held by Tipu Sultan, by the treaty of Srirangapatnam in 1799. Rev. Jacome Forico, a priest was the first European who visited Nilgiris in 1603 and released his notes about the place and people of Nilgiris. In 1812 surveyor William Keys and Macmohan visited the top of the plateau. 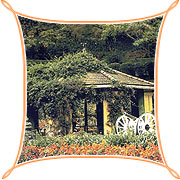 Botanical Gardens : Botanical gardens are a major tourist attraction for those who visit Ooty, one of the most popular hill stations of India. They sprawl over 50-acre and lie on the lower slopes of Doddabetta peak, which is the highest point in Ooty. Marquis of Tweeddale established these gardens in the year 1848.

The gardens are formally laid out with lily ponds, and there are clipped bushes in the form of elephants, with raised trunks. One can find a thousand different species of plants including some thirty types of eucalyptus in these gardens. There is also a fossilised tree trunk, which is said to be 20 million years old. Towards the eastern part of the garden there is a wooden house made of logs known as "Toda Mund", which provides an excellent view.

Ooty Lake : About 1-km distance there is an artificial lake with a charming look, which was formed in 1824 by Mr. John Sullivan, the then Collector of Coimbatore.

Rose Garden : Rose Garden is situated about 3 to 4-km away from Charring Cross. They are spread over an area of 10 acres of land with 2000 variety of roses. Rose Gardens lie on the way to the boathouse.

St Stephens Church : Situated in the hilly area on Club Road, St Stephens Church is said to be the oldest in the Nilgiris. The church was built in 1829 and consecrated in 1830. The beam of the church was taken from the palace of Tipu Sultan at Srirangapatnam. The cemetery close by houses the grave of John Sullivan, the founder of Ooty.

Accommodation is available at the luxurious and economy class hotels, lodges, and resorts in Ooty. Both Indian and Western style accommodation and food are available. Prior booking is advisable, especially during the summer months.

Just about anything available in the cities can be had at Ooty with the added attraction of leisurely shopping. Exclusive Nilgiri products including Nilgiri tea, fruits, natural oils like Eucalyptas, Toda embroideries, plant nurseries are easily available in the town. Co-operative Super Market and Municipal Market are some of the best places for shopping fruits and general groceries. Kairali of Kerala Handicrafts and Poompuhar of Tamil Nadu Handicrafts have their showrooms near to Super Market Buildings on Charring Cross.

Air : Coimbatore, 105 km from Ooty, is the nearest airport.

Road : A good network of roads and national highways connect Ooty with all major towns and cities. There are regular bus services to and from Coimbatore, Trichy, Bangalore, Madurai, Kanyakumari, Mysore, Palghat, Calicut, Tirupati and other important destinations in South India. Ooty is also well connected with major cities of Kerala and Karnataka.