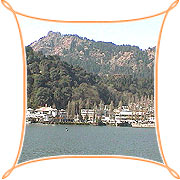 A small town in the hills of Kumaon, Nainital is a lovely hill station surrounded by mountains on three sides. Once this area had many lakes and it was called the City of 60 lakes or 'Chakta'.

Most of the lakes in the region have disappeared and whatever remains is just a glimpse of what they might have been in the past. Today the life of Nainital revolves around the lake of Naini. But there are few other lakes around Nainital which are equally beautiful and attractive as the Naini lake.

Nainital was discovered in 1841 by a Britisher called Lord Barron. The weather, the surrounding and the mesmerising beauty of this area attracted the British administrator who turned this place into the summer capital of the United Province. Being a major tourist place Nainital is always bustling with visitors and it is always better if accommodation and other facilites are prearranged.

Naina Devi Temple : The attractive lake of Nainital is said to be the eyes of Sati, wife of Lord Shiva. Sati jumped into the sacrificial bonfire. Lord Shiva to mourn the death of his beloved wife carried the body across the country. The remains of her body fell at various places which today are sacred worship places for the Hindus.

Hanuman Garhi : This place is of religious importance. Situated at a height of 1951 meters this place was established by Baba Neem Kiroli. A very beautiful Hanuman mandir is at the top. From Hanuman Garhi watching the Sunset is very soothing. You can walk down from Nainital to Hanuman Garhi.

Naini Lake : Naini Lake or Naini Taal, the picturesque blue green lake is located in the district of Nainital. It is from this lake that the city of Nainital, the beautiful settlement by the lake, derives its name. Naini Lake is so called because of its eye-like shape.

Naina Peak : Known as the China peak this peak is the highest point in Nainital. From here Nainital appears as a bowl. You can walk or take ponies to the peak. From this peak you can capture the exciting views of Nainital. Naina peak also gives a good view of the Camelback peak. There are no hotel or restaurant on the top so carry food and water along with yourself.

Zoo Gardens : Naini Tal has a small but a very beautiful Zoological garden. There are many animals kept here which includes Deers, Bears, Tigers and many more. The hygiene and cleanness of the zoo is a point which attracts the mind even if one ignores it. Not surprising this zoo is one of the most clean zoos in the country. The zoo can be reached on foot or taxi can be hired.

In October / November the UP tourism organises a Winter Festival which acts as window to the rich culture and tradition of the area. Other Fairs & Festivals

The Mall is the main shopping center in Nainital which has some of the good shops where one can do some shopping. In Nainital the main items to be bought are the woollen garments, decorative pieces made from wood. The decorative colourful candles are one thing every traveller to the place takes back with himself. For the woollen garments the Bohtia Bazaar is the best place whereas the Mall road and the Mallital are places for good bargain of candles and wooden stuff.

Nainital is located in the Kumaon hills and the weather is very pleasant throughout the year except during winter months. The temperature is not very high at any time but in winters it becomes very cold. The climate of Nainital is regulated by the lake here which showers rain almost every afternoon. The best time visit the place is between April to June and then again in September October. The months of January to March are marked by the snowfall which is for a very short time. It is advisable that contact any local person before going to Nainital to watch snowfall.

The nearest railway station is that of Kathgodam which is connected by trains from Delhi and Howrah. The narrow gauge trains come from Lalkuan which is 55 kms from Nainital. From Lalkuan and Kathgodam regular taxi and bus services are available for Nainital. Nainital is well connected by buses with other parts of the state. Inter state services are also available. The state transport corporation as well as the private operators have their buses on this route.