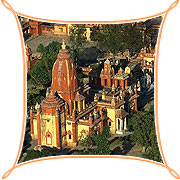 - Lord Krishna
He is easily the most popular person here. Every square foot of Mathura-Vrindavan is wrapped in timeless devotion to Lord Krishna, the evergreen hero of Hinduism, the lover of Radha, the cowherd-prince and the re-incarnation of Lord Vishnu. Mathura without Lord Krishna is like Bethlehem without Christ. Welcome to Brajbhoomi or Krishna-land.

- Brajbhoomi
The city of Mathura in Uttar Pradesh , the nucleus of Brajbhoomi, is located at a distance of 145 km south-east of Delhi and 58 km north-west of Agra . Covering an area of about 3,800 sq. km., today, Brajbhoomi can be divided into two distinct units - the eastern part in the trans-Yamuna tract with places like Gokul, Mahavan, Baldeo, Mat and Bajna and the western side of the Yamuna covering the Mathura region that encompasses Vrindavan, Govardhan, Kusum Sarovar, Barsana and Nandgaon. In a nutshell, the land of Braj starts from Kotban near Hodel about 95 km from Delhi and ends at Runakuta which is known specially for its association with the poet Surdas, an ardent Krishna devotee.

- An Ancient City
An ancient city, Mathura's strategic location at the cross roads of various trade routes - that went westwards to West Asia and the Roman Empire; northwards, via Taxila, Pushkalavati and Purushapur to Central Asia and the Silk Route and eastwards to China - ensured its position as a centre of trade and a meeting point for varied cultures.

By the 5th century BC, during the time of Buddha, it was a major metropolis and the capital of the Surasena Kingdom. Mathura saw its `golden age' during the rule of the Kushanas and the able governance of rulers Kanishka, Huvishka, and Vasishka, when the arts flourished and economic wealth grew. It remained a centre of power during the Mauryan period, through the enlightened rule of Emperor Ashoka (3rd century BC) to the Gupta era (4th century AD). 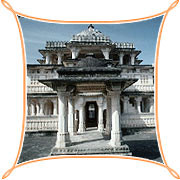 - Holy Land
It has often been said that it is easier to count the number of dust particles on the surface of the earth than to count the number of holy places in Mathura. Each of the Ghats, for instance, has its own Krishna myth. Here He rested after killing his evil and tyrannical uncle, King Kansa; This is where His mother tied him after he stole butter; This is the sacred grove where Krishna and Radha spent lazy, love-filled times - the list is endless. In Mathura-Vrindavan, it is difficult to know the dividing line between reality and myth.

Christ Church & St. Michael's Cathedral : Built in 1846-1857, Christ Church is the second oldest church of Northern India. The Church overlooks the ridge and is one of the landmarks of Shimla. The clocks on Christ Church were added later but none of them are functional now. The Church's exquisite beauty comes with the stained glasses that are fitted on its windows. The town's other important churches are St. Michael's Cathedral and Roman Catholic Cathedral, which is just off the Mall.

The Mall : This is the main shopping centre of Shimla with restaurants. The Gaiety Theatre, which is a reproduction of an old British theatre is a center of cultural activities. A passenger lift of HPTDC can be taken from the Cart Road and the Mall. Lakkar Bazaar adjacent to the Ridge is popular for its wood-crafts and souvenirs.

The Ridge : The large open space in the heart of town presents excellent view of the mountain ranges. Shimla's landmarks - the Neo-Gothic structure of Christ Church and the new - Tudor Library building is worth seeing.

Jakhu Temple : Dedicated to Lord Hanuman, this temple is at an altitude of 2,455m near the highest point of Shimla ridge. It offers a fine view over the surrounding valleys, out to the snowcapped peaks, and over the town itself. The temple is a 45-minute walk from the Mall. Jakhu is a vantage point for witnessing the changing skyline as the sun rises or sets.

Accommodation in Mathura - Vrindavan ranges from guesthouses to high-end hotels. Hotel Mansarovar Palace, Hotel Madhuvan and Hotel Radha Ashok (3 km from the city on the Delhi road) are the only top end hotels in Mathura.

Rail : The Railways have a station at Haridwar. This major pilgrimage center has been well connected by trains to all the major towns of India. In fact trains bring the major load of pilgrims and tourist inflow to Haridwar.

Road : Mathura is connected by road with Delhi (3½ hours) and Agra (1½ hour). Mathura is well connected by train with Agra (1 hour), Bharatpur, Sawai Madhopur and Kota. The Taj Express runs daily between Matura to Delhi (2½ hours).