As one approaches Leh for the first time, via the sloping seep of dust and pebbles that divide if from the floor of the Indus Valley, one will have little difficulty imagining how the old trans -Himalayan traders must have felt as they plodded in on the caravan routes from Yarkhand and Tibet: a mixture of relief at having crossed the mountains in one piece, and anticipation of a relaxing spell in one of central Asia's most scenic and atmospheric towns. 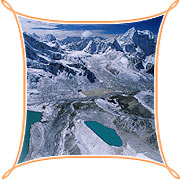 Spilling out of a side valley that tapers north towards eroded snow-capped peaks, the Ladakhi capital sprawls from the foot of a ruined Tibetan style palace - a maze of mud-mud brick and concrete flanked on one side by cream-coloured desert, and on the other by a swathe of lush irrigated farmland.

Leh only became regional capital in the 17th century, when Sengge Namgyal shifted his court here from Shey, 15-km southeast, to be closer to the head of the Khardung La-Karakoram corridor into China. The move paid off: with in a generation, the town had blossomed into one of the busiest markets on the Silk Road. During the 1920s and 1930s, the broad bazaar that broad bazaar that still forms its heart received more than a dozen pony- and camel-trains each day.

Leh's prosperity, managed mainly by the Sunni Muslim merchants whose descendants live in its labyrinthine old quarter, came to an abrupt end with the closure of the Chinese border in the 1950's. One after the Indo-Pak wars of 1965 and 1971, when India rediscovered the hitherto forgotten capital's strategic value, did its fortunes begin to look up. Today, Khaki-clad Jawans (soldiers) and their families from the nearby military and air force bases are the mainstay of the local economy in winter, when foreign visitors are few and far between.

Leh has nonetheless retained a more tranquil side, and is a pleasant place to unwind after a long bus journey. Attractions in and around the town itself include the former Palace and Namgyal Tsemo Gompa, perched amid strings of prayer flags above the narrow dusty streets of the Old Quarter.

Leh is also a good base for longer day trips out into the Indus Valley. Among the string of picturesque villages and Gompas within reach by bus are Shey, site of a derelict 17th century palace, and the Spectacular Tikse Gompa. Until one has adjusted to the altitude, however, the Only sightseeing one will probably feel up to will be from a guesthouse roof terrace or garden, from where the snowy summits of the majestic Stok-Kangri massif (6,120m), magnified in the crystal clear Ladakhi sunshine, look close enough to touch.

The Shanti Stupa : A relatively new addition to the rocky skyline around Leh is the toothpaste white Shanti Stupa above Changspa village, 3km west of the bazaar. Inaugurated in 1983 by the Dalai Lama, the "Peace Pagoda", whose sides are decorated with gilt panels depicting episodes from the life of the Buddha, is one of several such monuments erected around India by a "Peace Sect" of Japanese Buddhists.

Hemis : Thanks to the Hemis Setchu festival - one of the few held in summer, when the passes are open - Hemis, 45-km southeast of Leh , is the most famous Gompa in Ladakh . Every year in mid-July hundreds of foreign visitors join the huge crowds of locals, dressed up in their finest traditional garb, that flock to watch the colourful two-day pageant.

Likkir Gompa : 6-km to the north of the main Leh -Srinagar highway, shortly before the village of Saspol, the large and wealthy Gompa of Likkir, home to around one hundred monks, is renowned for its huge yellow statue of the Buddha to come which towers above the terraced fields and village below. It is also known as Lu-khyil ("water spirit circled"), a reference to Naga spirits who are said to have once lived here.
Inquire Now for Best Deals