The Lake Palace is one of the most beautiful palaces in the world, arising out of the Turquoise Waters of the Pichola like an elegant fantasy in white marble. The palace was built in the 17th century on a natural foundation of 4 acers of rock. It was initially called Jaginwas after its founder Maharana Jagjit Singh, 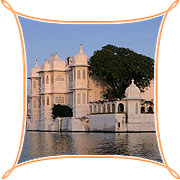 The Maharana, ruler of Jaipur from 1628 to 1654, was very friendly with Mughal Emperor Shah Jahan and encouraged his craftsmen to copy some of the glories of his incomparable buildings at Agra. The successive rulers used this cool haven as their summer resort, holding their regal durbars in its courtyards. These courtyards lined with columns, pillared terraces, fountains and gardens all add to its impressive image.

The rooms are decorated with cusped arches, inland stones of pink, and green lotus leaves and painted mirrors. apartments like the Bada Mahal, Kush Mahal, Ajjan Niwas, Phool Mahal and Dhola Mahal. The Lake Palace is located on the Jag Niwas Island and covers the whole of 1.5 hectare of the island in the middle of the Pichola Lake.

Built by Maharana Jagat Singh in 1743 it was meant as a royal summer palace and now converted in to a five star palace hotel. It is a magical palace and its image in the middle of the lake is like a leaf straight out of a fairy tale book with an excellent taste of intricate craftsmanship and the ethnic themes using the textiles and handicrafts all over highlight the beauty that is simply beyond compare the lake around makes a pleasant murmur with its rippling waves and lapping that adds to the mesmerising moments.