Ladakh is a land like no other. Bounded by two of the world's mightiest mountain ranges, the Great Himalayas and the Karakoram, it lies athwart two other, the Ladakh range and the Zanskar range .

In geological terms, this is a young land, formed only a few million years ago by the buckling and folding of the earth's crust as the Indian sub-continent pushed with irresistible force against the immovable mass of Asia. Its basic contours, uplifted by these unimaginable tectonic movements, have been modified over the millennia by the opposite process of erosion, sculpted into the form one sees today by wind and water. 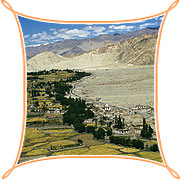 Today, a high -altitude desert, sheltered from the rain-bearing clouds of the Indian monsoon by the barrier of the Great Himalayas, Ladakh was once covered by an extensive lake system, the vestiges of which still exist on its south -east plateaux of Rupshu and Chushul - in drainage basins with evocative names like Tso-moriri, Tsokar, and grandest of all, Pangong-tso.

Occasionally, some stray monsoon clouds do find their way over the Himalaya, and lately this seems to be happening with increasing frequency. But the main source of water remains the winter snowfall. Drass (also spelt as Dras), Zanskar and the Suru Valley on the Himalaya's northern flank receive heavy snow in winter; this feeds the glaciers whose melt water, carried down by streams, irrigates the fields in summer.

For the rest of the region, the snow on the peaks is virtually the only source of water. As the crops grow, the villagers pray not for rain, but for sun to melt the glaciers and liberate their water. Usually their prayers are answered, for the skies are clear and the sun shines for over 300 days in the year.

The captivating landscape, with an incomparable diversity of flora and fauna: Ladakh is regarded as the 'trekkers' paradise' and, indeed, is a refreshing treat to the trekkers. Ladakh is the ultimate destination for a trekking holiday, offering everything from short and easy excursions to the long challenges of the snowy peaks, invoking visions of the spectacular views, the lush meadows, green woodland and fragrant orchards.

Ladakh and its adjoining areas like Zanskar valley provide excellent trekking routes, which allow the traveller to visit the remote village in the far-flung area of these regions. The high mountain passes, monasteries, yak herds on the high slopes would all give a feeling of the land beyond.

The dominant religion of Ladakh is Buddhism, and it is the living religion of the people here, the practice of which has enabled them to live in complete peace not only with other religions but also with the nature. It is manifest in the art and architecture of Ladakh. The monasteries, or the gompas as they are called, are beautifully designed and have the finest of sculptures, wood carvings, bronzes, gold and silver chortens, paintings done on silk scrolls and walls and scriptures printed out of hand-made wooden blocks. In the monasteries the devout pray for the peace of the world.

The centuries -old culture of Ladakh has found expression in its monuments, monasteries, oral literature, art forms and fairs and festivals. And in the time-honoured tradition of collective celebration ; every occasion -marriage , birth , harvesting or even the flowering of plants --- is marked by feasting, dancing and the singing of folk songs that form a part of its living heritage .

Air : The nearest airport is Leh. There are flights from Delhi, Chandigarh and Srinagar.