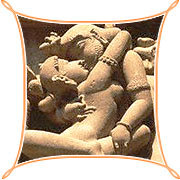 Khajuraho temples in Madhya Pradesh, has the largest group of medieval temples each studded with countless sculptures of extraordinary grace and delicacy. The temples of Khajuraho, are indeed, celebrations of the stylized and refined courtly accomplishments of beauty, love and creative arts. Khajuraho temples lies about 385 miles (616 kilometers) southeast of Delhi.

Temples of Khajuraho : In the temple architecture of India, the Khajuraho complex remains unique. The architectural beauty of the the exquisite sculptures at Khajuraho temples are unlike any other in India. Among the vast number of temple, Khajuraho temple holds a special place for its intricately thematic carvings on the stones. Build by Chandela Rajputs, a tribal dynasty ruler who ruled this part of India from the tenth to the twelfth centuries.

The construction of this imposing temple that took hundred years to complete from 950-1050 AD in a truly inspired burst of creativity. During the time of construction, the entire site was enclosed by a wall with eight gates, each flanked by two golden palm trees. There were originally over 80 temples, of which only 22 temples now stand there which scattered over an area of about eight square miles.

Every spring the stones of Khajuraho come to life during the prestigious 7-day Khajuraho Dance Festival when the glory of the temples is celebrated with true fervour and joy. It is a cultural festival for the celebration of the Indian classical dance and music, believed to have basically originated in the Hindu temples

The access to Khajuraho is by air, rail and road. Khajuraho has a well-developed infrastructure in place. The Madhya Pradesh Information Centre gives prompt assistance to all queries. It also offers economical packages for tourists.