Temple construction continued sporadically until the 12th century. Far removed from the politcal centre of the kingdom, its location minimised the danger of external attack, making Khajuraho te Chandelas' spiritual homeland. In 1335 Ibn Batuta talks about 'Kajarra' with a great pond, flanked by temples containing idols and ascetics with matted locks living in them. The earliest temples of Khajuraho were built in coarse granite. However, the most famous ones - including the World Heritage monuments known as the Western Group of temples - are mostly built in fine-grained buff, pink and pale yellow sandstone, quarried from neighbouring Panna. The temples belong to different religious sects like Shaiva, Vaishnava and Jain and mark the culmination of the northern Indian or Nagara style of temple architecture. 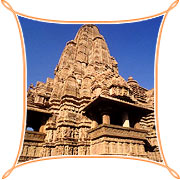 The Khajuraho temples are almost all aligned east to west, with the entrance facing east. A profusely carved arch leads to the oblong porch or ardhamanapa, behind which is the large assembly hall or mandapa, open on three sides, followed by the still larger hall mahamandapa, a closed hall with a corridor around it. This hall finally leads into the vestibule or the antarala. Beyond this is the garbhagriha or sanctum, entered through another ornate doorway, that houses the cult deity. The larger temples have both inner and outer ambulatory passages or sandharas. And some have subsidiary shrines on the four corners making the structure a panchayatna or five shrined complex. Both the interiors and the exterior are beautifully carved.

A series of friezes runs right round the temple, from the basement to the projections and the recesses of the walls above. The inside walls, doorways, pillars, pilasters, niches, architraves and ceilings all display a wealth of ornamentation which has few parallels. The sculptors of Khajuraho have show immense virtuosity in expressing the myriad aspects of Indian life - god and goddesses, guardians of the quarters, sensuous and graceful apsaras (nymphs), surasundaris (attendants of higher divinities), salabhanjikas (tree nymphs) in infinite moods and postures.

There are three groups of temples at Khajuraho. The Western group has temples to Shiva and Vishnu. The northern group has Vaishnava temples for the most part and the south eastern group consists of Jain temples. 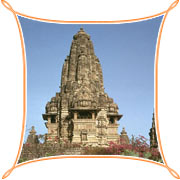 The oldest of these temples, dating back to 900 CE is the Chaunsath Yogini Temple in the western group, located southwest of the Shibsagar lake.

To the north of this is the Kandariya Mahadeo Temple, the largest in Khajuraho. It is considered to be the best representation of the Khajuraho style of Indo Aryan temples - consisting of a sanctum - Garbhagriha, a circumambulatory path - Pradakshinapatha, an Antarala, Ardhamandapa, Mandapa and a Mahamandapa. The sanctum enshrines a marble Shivalingam.

To the north of this temple is the Devi Jagadambi Temple. Further north is the Sun temple, enshrining an image of the Sun God, on a chariot pulled by seven horses. To the extreme north of this, is the Vishwanath temple, built along the lines of the Kandariya Mahadeo temple. Inscriptinos reveal that it was built by King Dhanga and that an emerald image of Shiva - Marakateswara was enshrined here. South west of this temple is the Parvati temple.

Emperor Lakshavarma is credited with building the Lakshmana-Chaturbhuja Temple at Khajuraho. The image enshrined here said originally to be from Tibet was gifted to Lakshavarma by the Pratihara ruler Devapala. This is a three headed image of Vishnu, bearing a human, varaha and a simha head. The Matangeswara temple enshrines Shiva, in the form of a highly polished Shivalingam. There is also a small Varaha temple in the vicinity.

The eatern group has temples to Bhrama (Shiva), Vaamana, and Javari. The Jain temples in the south eastern group are very similar in construction to the others. The Parsvanatha temple is the largest of these. There are also temples to Ghantai and Adinatha.
.. Click To Book Khajuraho Travel