Amidst the sand dunes and thorny vegetation of Thar desert towers a fort, 120 metres above the plain. The fort overlooks the imperial city of Jodhpur, which is a part of the Desert Tourist Triangle. The old Jodhpur city is surrounded by a 10 km long wall with eight gates serving as entrances. 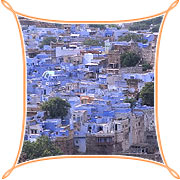 The new city is settled around this walled area. The Maruthal or 'land of death' , came into life when the Rathores of Kanauj moved in. But the city of Jodhpur was founded by Rao Jodhaji in 1459 AD. This city was on the silk route of the 16th century and hence was host to a number of travellers.

In Jodhpur, the genius of its sculptors comes to life in its exquisite palaces, forts, temples and havelis, which stand testimony to the imperial grandeur. The most alluring part of Jodhpur is the traditional lifestyle, festivity and the smiling people who treasure this former princely state.

Mehrangarh Fort : Situated on a steep hill, Mehrangarh fort is one of the largest forts in India. The beauty and the grandeur of numerous palaces in the fort narrates a saga of hard sandstones yielding to the chisels of skilled Jodhpuri sculptures.

Sardar Samand Lake and Palace : Rajasthani village life and vibrant cultural colours come alive as you drive along the 55 kms stretch. The monotony of the drive is broken by Chinkaras and Black Bucks who frisk pass the road.

Umaid Bhawan Palace : Built by Maharaja Umaid Singh (1929 -1942) and named after him, this exquisite palace is also known as Chittar Palace because of the local chittar sandstone used. It is a splendid example, of Indo-colonial and art deco style of the 30s. A unique feature of this palace is the fact that the hand chiseled sandstone blocks have been put together in a special system of interlocking, there is not mortar binding.

A portion of the palace has been converted into a hotel, the other remains on view to visitors in form of excellent museum which houses model airplanes, weapons, antique clocks and bob watches, priceless crockery, and hunting trophies. Both sections retain the ambience of royal splendor .

Jaswant Thada : A cluster of royal cenotaphs in white marble built in 1899 A.D. in memory of Maharaja Jaswant Singh II. Within the main cenotaph are the portraits of various Jodhpur rulers.

Government Museum : This museum has a rich collection of weapons, textiles, miniature portraits, local crafts and images of Jain Tirthankars. It is situated in the middle of the Umaid public gardens.

Air : Jodhpur has its own airport and regular flight services conect the city with other major cities in and around Rajasthan.

Rail : The city is also well connected by the railway lines and trains are available for other major cities in the country from here. The 'Palace on Wheels' also visits this city of royal splendour.

Road : The state transport has bus services from other cities of the state and some services are interstate too.