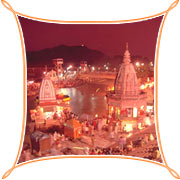 Haridwar - gateway to the four pilgrimages in the Uttrakhand region, is located on the foot hills of Shivaliks. It is on the banks of River Ganga. The Ganga leaves the mountains and enters the plains with Haridwar being the first major town on the plains.

Though the Ganges does not lose its rapids completely nevertheless it becomes very quite and calm here. The water is clean and people prefer taking bath on the numerous ghats built on the river shores. It is said that taking bath here purifies the soul and opens the way for the ultimate freedom, Nirvana.

Haridwar has earned fame as being the place which has been blessed by the trinity of Lord Shiva, Vishnu and Brahma. It is also one of the major Shaktipeeths.

Haridwar has since ages been a source of Ayurvedic medicines and has been providing herbal remedies. Haridwar one of the first towns to be developed on Ganges is still lush and green with forest and trees. With Rajaji Park in the vicinity Haridwar has also been the destination for the wildlife and nature lovers. The city acquires a unique charm in the evening when the ghats become breath takingly beautiful with thousands of Diyas and Marigold floating in the waters of Ganges. 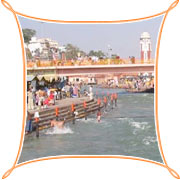 Har Ki Pauri : This ghat is one of the most sacred ghats in India. People say that this ghat was built by Vikramaditya in memory of his brother Bhartrihari. This ghat is also known as Brahmakund. In the evening a Maha Aarti is performed on this ghat. It is an event which is a must, not be missed by any visitor.

Mansa Devi : This temple is located on top of a hill called the Bilwa Parvat. The temple can be reached by the rope way or one can take the normal trekking route to the top. The top of the hill gives you an excellent view of Haridwar.

Kavand Mela : The fair is held ten days before Shivteras, during the Hindu months of Shravan & Phalgun.

Daksha Mahadev Temple : Four kms from Haridwar is a town called Kankhal. Mythology says that the king of this place King Daksha Prajapati performed a yagya. His daughter, Sati was married to Lord Shiva. But Daksha was not happy with this marriage and did not invite Shiva-Sati in the Yagya. But Sati came and was insulted by her father. She could not take the insult and burnt herself in the yagya kund. On hearing this the followers of Shiva killed Daksha. But later Mahadeo (Shiva) brought Daksha to life. The Daksha temple is an attribute to this legend. This place is one of the five sacred places in Haridwar.

Chandi Devi Temple : This temple is on the top of a hill called the Neel Parvat which is on the other side of the river Ganga. The temple was constructed by the King of Kashmir, Suchat Singh, in 1929 AD. Chandi Devi is a three km trek from the Chandi Ghat.

Sapt Rishi : At one place Ganga divides herself into seven small streams. This place is known as the Sapt Rishi and provides a very pleasing sight.

Being a major pilgrimage center, do not expect to get luxury over here. The accommodations are simple, yet elegant and on a resonable price. One can easily get accommodation in hotels as well as in Dharamshalas and in number of Ashrams situated within this religious town. The govt accommodation include GMVN tourist hotels and Shankar Niwas.

Haridwar is a pilgrimage center and visitors come here to visit the temples so as such there is no particular item which can be recommended to be bought here. But Haridwar offers you some good handicraft items which can be kept as decorative pieces or can be used as gift items. In the markets surrounding the temples, one can find jewellery imitations which are very popular among the devotees. The bangles, chains, ear and nose rings are some items which can be bough there.

Then the shops also have items made of stone. From Rishikesh, Ganga enters the plains and in all this area it sheds its load of stones which are not only polished naturally but come out in amazing shapes and sizes. These stone are used to make small idols which are very neatly, delicately and intricately carved.

Haridwar is located at a height of almost 300 meters. One Should never expect any sort of pleasant high altitude climate here. During the summers the temperature usually hangs around 40 degrees but winters sees the mercury dipping as low as six degrees. So neither of the seasons are suitable or ideal for tourists to venture in Haridwar. The monsoons further add to the miseries of the visitors. The best seasons to visit Haridwar is some where between September and June.

Air : In the region Air Services are available only upto Jolly Grant airport in Dehradun.

Rail : The Railways have a station at Haridwar. This major pilgrimage center has been well connected by trains to all the major towns of India. In fact trains bring the major load of pilgrims and tourist inflow to Haridwar.

Road : The National Highway No - 45 crosses through the city so it is connected to other cities of the State as well as other towns in India in an efficient manner. There are buses available from Delhi to this place. The state transport has ordinary as well as deluxe and semi-deluxe buses on this route for long distance travel. There are private buses avaialable too, which willtake you to nearby places and some of these private deluxe buses run on the long distance routes.