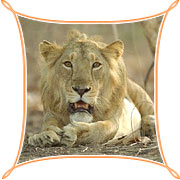 The Gir national park lies in the Gujarat peninsula in SW India. The terrain is rugged with low hills and the vegetation is mixed deciduous, with stands of Teak, Acacia, Jamun, Tendu and Dhak trees, interespersed with large patches of grasslands. On the hills of the trees are sparse and stunted. Within the sanctuary, there are numerous human settlements of cattle herders called Maldharis with an estimated 20,000 head of livestock (which, incidentally, forms a significant part of the Lion’s diet).

There are also places of Hindu worship and pilgrimage and sulphur springs at Tulsi Shyam and Kankai Mata. At the edge of the park there are good populations of Indian Gazelle, protected by the religious sentiment of the local people. The Kamleshwar Lake has some Marsh Crocodile. Birds in the park include the Paradise Flycatcher, Bonelli’s Eagle and Painted Sandgrouse.

Three unusual reserves, the Nalsarover Lake and Sanctuary, where large numbers of water-birds can be seen; the bare saline flats of the Rann of Kutch, incredibly the home of the Indian wild ass and the spectacular Flamingo island where nesting colonies of flamingoes are to be seen, make Gujarat an exciting place for wildlife enthusiasts. Gir Sanctuary is the last and only home of the critically endangered Asiatic Lion.

These lions are a smaller more compact version of their African version, and are best viewed at dawn or dusk when they are on the move. The major difference between the two is that the African Lion appears larger than the Indian Lion because of its large and luxuriant mane. In The past Gir had a much bigger coverage area. After Indian government placed a total ban on killing of Lions in 1955, within the time span of three years the area estimation came around 2,560-sq-km and the Lion population was estimated at 287. 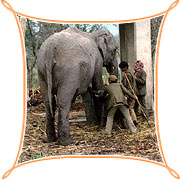 Since then, the forest area very quickly got reduced in area to 1,452-sq-km. In 1965, the Gujarat government declared Gir forest as a sanctuary and in 1975; part of the sanctuary was declared as a National Park. And with the success of the protection program there is an incredible increase in the Lion population too, from 177 in 1974 to around 300 in 1995. The main territories of this territorial predator outside Gir national park in Gujarat include Nagwa Beach in Diu, Sutrapada, Palitana, Mahuva, Savarkundla, Mitiyala, Keshod, Maliya Hatina, and Girnar
.. Click To Book Gir National Park Tour