Dalhousie is a quiet town, with a sense of enchantment. This hill station spreads over five low-level hills at the western edge of the Dhauladhar range, just east of the Ravi River. The picturesque town is interspersed with the colonial-era buildings, low roofed stalls and hotels. The pine-covered slopes around it are intersected with paths and treks, which are ideal for short undemanding walks. 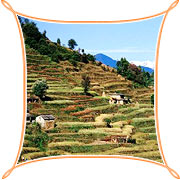 The gateway to the Chamba Valley , this colonial town was established in 1854 by the British governor-general Lord Dalhousie. Covering an area of 14 sq.-km and surrounded by alpine vegetation, Dalhausie has charming architecture and panoramic views of both plains and the whitecapped views of the mountainous ranges.

In 1851, the princely state of Chamba was approached by Lord Napier of Magdala. The British wished to establish a sanatorium for Europeans on the outer slopes of the Dhauladhar range. There, the sun shone warmly on scented forests of pine and oak, the air was crisp and invigorating, the scenery beautiful.

Negotiations were carried on with the Raja of Chamba and in 1853, the plateau of Kathlog, Portreyn, Tehra and Bakrota were transferred to the Government of India against a compensation of Rs. 2000 to be paid as an annual tribute to Chamba state. On the recommendation of Sir Donald McLeod, the new sanatorium was named Dalhousie, after Lord Dalhousie, the first British Governor General of India. In 1866, the cantonment area of Balun was also taken over and remains a cantonment to this day. 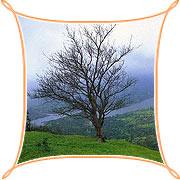 Khajjiar : Around Dalhousie are wealth of places which beckon those who have an eye for beauty or a nose for adventure. Khajjiar, just 7 kilometers from Dalhousie is an enchanting saucer shaped meadow fringed by cedar trees of great antiquity and stateliness. In the center of the grassy meadow at Khajjiar lies a small lake. And on it, are two floating islands, sometimes hidden from view by the tall grass that grows on them. Khajjiar, known as one of the most charming spots in the Himalayas , derives its name it is said from its ancient, golden domed temple of Khajinag. A nine hole golf course is an added attraction at Khajjiar.

Jandhri Ghat : Around half a kilometre away from the Subhash Baoli, Jandhri Ghat enfolds an elegant palace in the midst of tall pine trees. Chamba's erstwhile rulers governed from here till the advent of Lord Dalhousie. The palace houses a number of shikhar trophies. Beside the palace, Jandhri Ghat offers heavenly spots for picnicking-gushing streamlets in the midst of fragrant pine-scented breezes. Bakrota Hills and the 'Round' (2085m): Less than 5 km from the town centre, the Bakrota Hills frame a breathtaking view of the further snow-clad peaks. The 'round' is a walling circuit around the hill, very popular with residents.

Dainkund : At an altitude of 2,745 m and 10 km from the town, this tall peak outside town affords a bird's-eye view on a clear day, of the hills, valleys and the river Beas, Ravi and the Chenab threading their silvery way down to the plains.

Panjpulla : Just 2 km away from the town lies the 'five bridges' memorial, built in memory of Ajit Singh, one of India's well-loved freedom fighters. A natural tank and creams give the spot a fitting serenity.

Being one of the most famous hill stations of Himachal, Dalhousie is well equipped with excellent accommodation facilities. One have got the options to stay from luxury and five star hotels to small budget hotels and tourist lodges, which offer accommodation at resonalble prices.

Dalhousie ranges between 1,525m and 2,378m high from sea level. The maximum temperature of Dalhousie in summers is 30*C and the winter temperature comes down to almost O*C. Heavy woollens are required in winter and light woollens or tropicals in summer.

Air : The nearest airport is at Gaggal (Kangra), 140-km from Dalhousie.

Rail : The nearest railhead is Pathankot, which is well connected to Amritsar, Jammu, Delhi and Jalandhar.

Road : Onward journey from Pathankot to Chamba and Dalhausie is by road. Punjab and Himachal Roadways run services, as do private operators.