The history of Agra as an imperial city begins withAkbar. His predecessors, Babur and Humayun never got the opportunity to plan any grand buildings. It was Akbar who laid the foundation of the empire and then built this majestic citadel to match his achievements. With the new Fort, Agra got a new name - Akbarabad. The site was chosen because the river here acted as a natural moat. An older brick fort built by the Lodi sulans that stood at the site was demolished and, according to the Akbarnama, some 3,000 to 4,000 'skilled masons, hardy labourers and other staff' toiled daily to raise the first-ever fort enclosed by stone walls. The red sandstone walls rose to a height of 22 metres and stretched a distance of over a kilometre. Akbar's son, Jahangir, notes in his memories that Agra Fort and the buildings that Agra Fort and the buildings within it cost the royal exchequer a tidy Rs. 3.5 million. On the city side, there was a deep moat between two layers of high, protective battlements. The Fort was built in a crescent shape following the curve of the river and the walls were pierced by slits to allow musketeers to fire at the enemy. Drawbridges over the moat led to four giant gateways. Two of the gates, the Hathi Pol and the Amar Singh Gate, with Naqqar Khanas or Drum Houses built over them, are still in use. 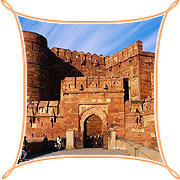 Abul Fazl mentions over five hundred buildings within the Fort. However, apart from the alls and the gateways, few of the Akari structures survive today. Shahjahan demolished many of the sandstone buildings, remodelled others and built his own marble palaces. The Fort faced more destruction during the twilight years of the Mughal empire when the marauding Jats took away the marble and pietra dura pillars for their own palaces. The final assault came from the British who sent off the royal baths to London to be exhibited in palaces and destroyed many other buildings, replacing them with ugly army barracks. But enough remains to give the visitor a flavour of the past.

What makes it more interesting is the fact that one can trace here the architectural styles of the three emperors who ruled from the Agra Fort. Enter Agra Fort from the soaring portal of the Amar Singh Gate to the south, and turn right to see the only surviving palace built by Akbar. Jahangiri Mahal is said to have been built somewhere around AD 1570 by Akbar for his son Salim, who later took the title of Jahangir. Some scholars feel that the palace could not have been named Jahangiri Mahal during Akbar's lifetime, as his son was then known as Salim. Also, the layout, with its rooms opening onto an inner courtyard, is more on the lines of a harem. On the shores of River Yamuna, to the northwest of the Taj Mahal, Emperor Akbar started a majestic fort, which gained Jehangir and Shah Jahan as its future benefactors who added rose-red sandstone and marble buildings to it respectively.

Within 2.5- km-long and 20 feet high fortified walls, the premises of the fort houses many visionary palaces, such as the Jahangir Palace and the Khas Mahal, audience halls, such as the Diwan-i-Khas; and two very beautiful mosques. The massive gatway of Amar Singh gate towards the south is the entry point of the fort. The myriad buildings and structures inside the fort give an impression of a city within the city. The marble pearl mosque inside the fort is one of the most beautiful mosques in India, while the two gardens within the pavilions are small but well kept.
.. Click To Book Agra Red Fort Tour